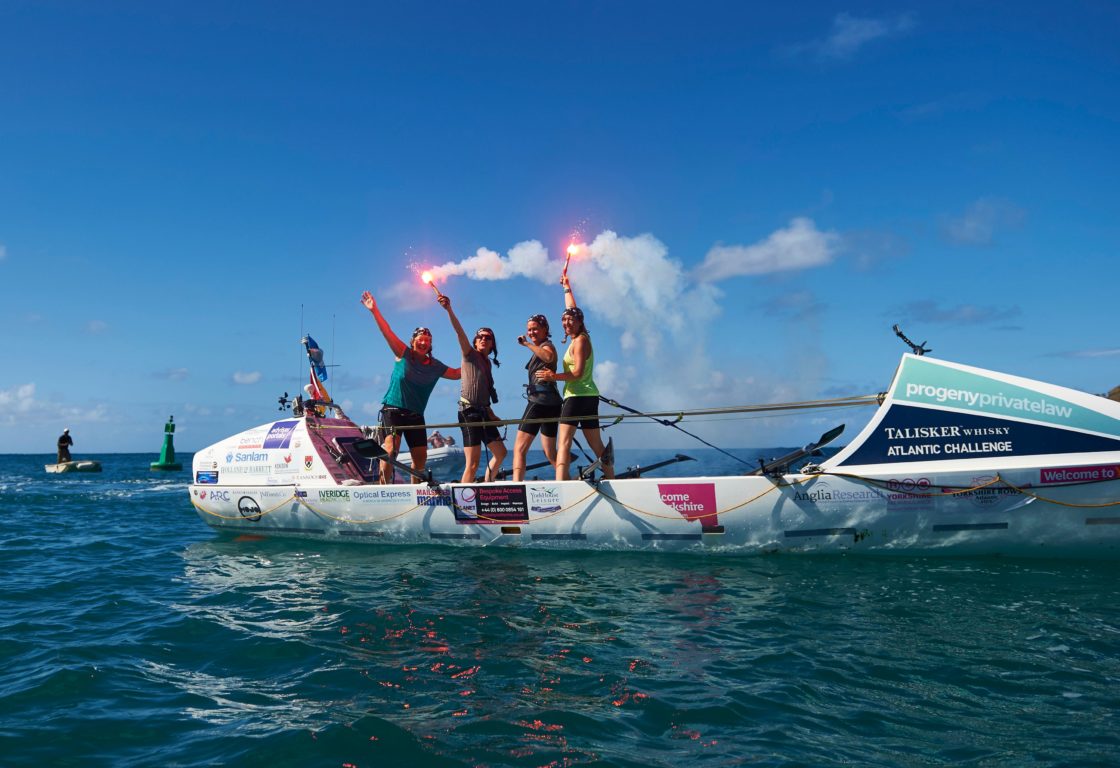 ‘Row row row your boat gently down the stream….’ This is not that kind of story.

This is the inspirational story of 4 middle aged women who rowed a boat 3,000 miles across the Atlantic Ocean, rowing themselves straight into the Guinness Book of World Records as the oldest, all female crew to do so. They did something most of us probably would never have even thought of doing, let alone actually do it. And for this, I wanted to give them a shout out for inspiring me, and hopefully others that it is still possible to try new things in our middle years. Perhaps not quite that adventurous! I spoke to Frances Davies, who was 47 at the time and the driver behind the idea, and it became evident that it wasn’t just that challenge that was life changing, but something else.

What on earth motivates someone to do something like this at our age? I asked her. She used to meet up with her gal pals at the weekend, row for fun and have a chat over a coffee after. Until one day when the pressures at her work went too far and she knew she had to do something to change her life. So she just came out and asked them if they fancied entering the Talesker Whisky Atlantic Challenge. ‘It wasn’t about the winning, just the challenge of actually doing it,’ she said. ‘I was inspired by Deborah Searle who wrote ‘Rowing it Alone’, she wasn’t a famous adventurer, she was just a regular woman. If she could do it, then why couldn’t we?’

The challenges were far reaching and more than just the race. They had to first check it was going to work with their husbands and children. How would they feel? How would they cope? Not just during the 2 months of the race, but the time commitment prior. And taking time off work and the potential pressures on finances.

Having the support of family and employers gave them the confidence to attempt it.

As you would expect, the experience was filled with highs and lows. There were the every day lows that just became the new way of existing such as sleeping in two hour long shifts in a tiny bunk rocking to the rhythm of the sea; having to go to the loo in close, open vicinity to the others; the constant ache of missing loved ones; and the solitude.

But the lows also reached frightening levels, such as the time when they lost their steering and found themselves drifting out at sea; or in the middle of an enormous storm with seemingly sky high waves crashing over them caused by a nearby hurricane; and of course sharks swimming up alongside them ‘immediately the hairs on the back of our necks went up’ she said.

But it was the highs I want to focus on, because those are what made the challenge life changing. ‘We felt like a guest of the sea’ she said. There was so much wildlife: from pods of dolphins dancing around their little boat; whales bigger than buses idling along beside them; misfiring flying fish landing in their boat and the noisy company of seabirds far out at sea. All this and being alone on the vast expanse of open water brought her and the others, a new perspective on life. ‘When I got home after, one day my husband was upset because one of the kids traipsed mud up the stairs. I literally didn’t care. You have a different sense of what is important’ she said. It made her really appreciate the hum drum of everyday life that we all take for granted ‘when I was out in the middle of the ocean I really craved a bit of everyday life’.

It was them and them only and trust was their glue

It was trust that became the binding foundation of the four. Trusting each other for performance, attitude and ultimately survival. Even though they were part of an organised race, they were still far away from anyone who could come to their rescue. It was them and them only and trust was their glue.

Pulling into Antigua harbour at the end of 67 gruelling days at sea must have been an experience to savour, ‘we were punch drunk when we finished!’ she said. Their bodies ached, they were exhausted and they had various scuffs to remind them of what they had just done, but that all soon dissipated when the Adrenalin kicked in.

We as women tend to think there is no point in trying if we might be no good. It doesn’t matter!

‘It has to be your dream and your own passion, just don’t piggy back on someone else’s passion.’

Why is it that we women are frightened of failure? The girls didn’t win, but they achieved something amazing, to me it was that they found new perspectives in their lives: appreciating the little things, living in the moment.